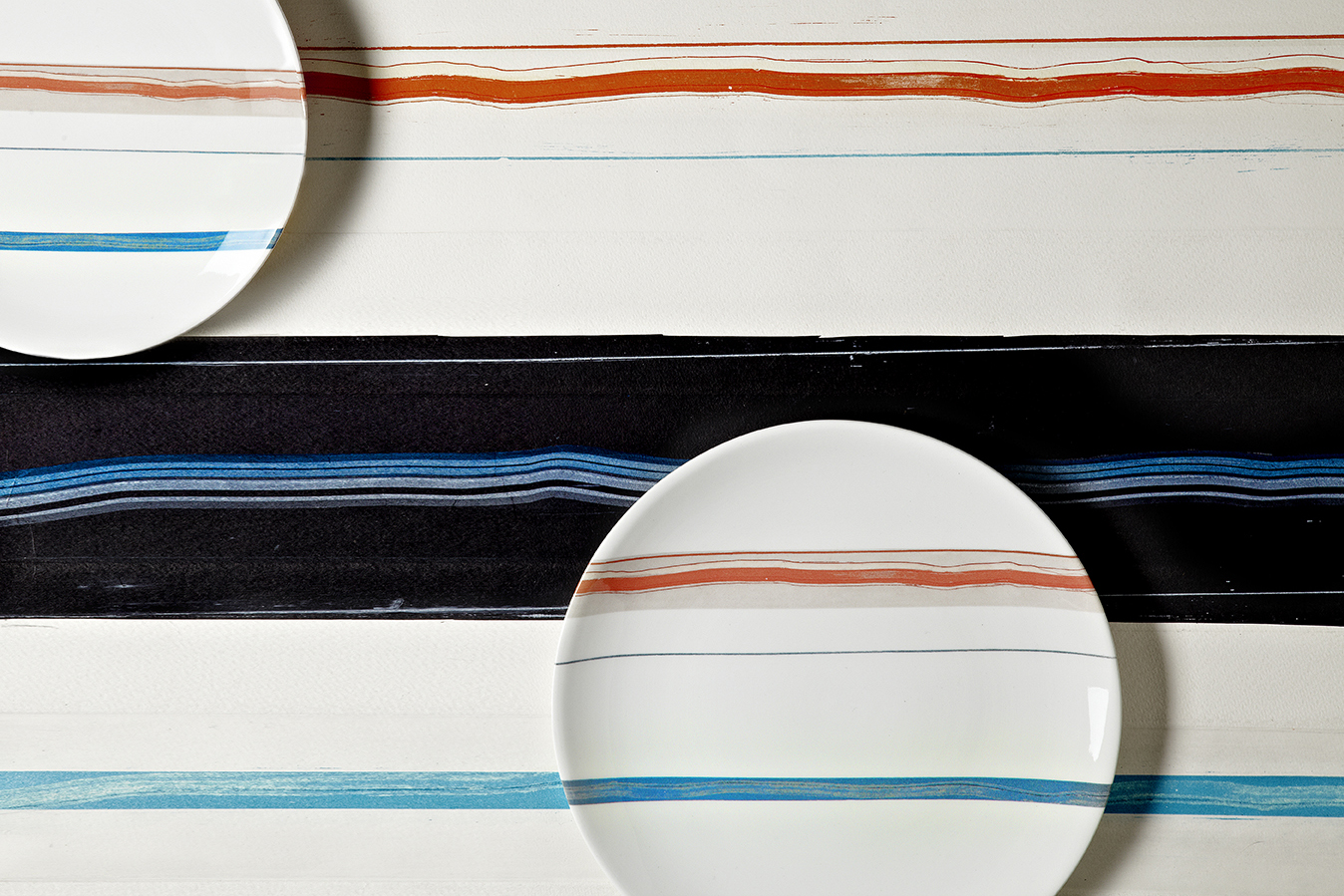 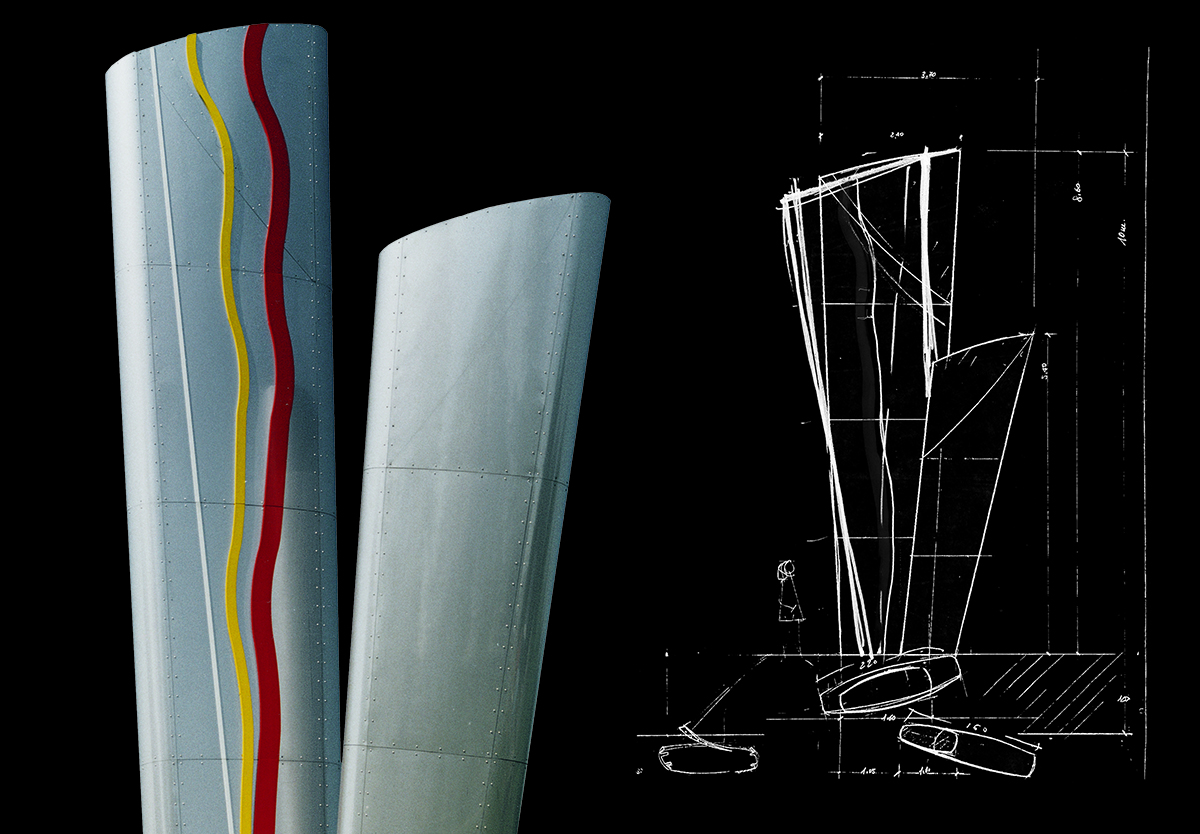 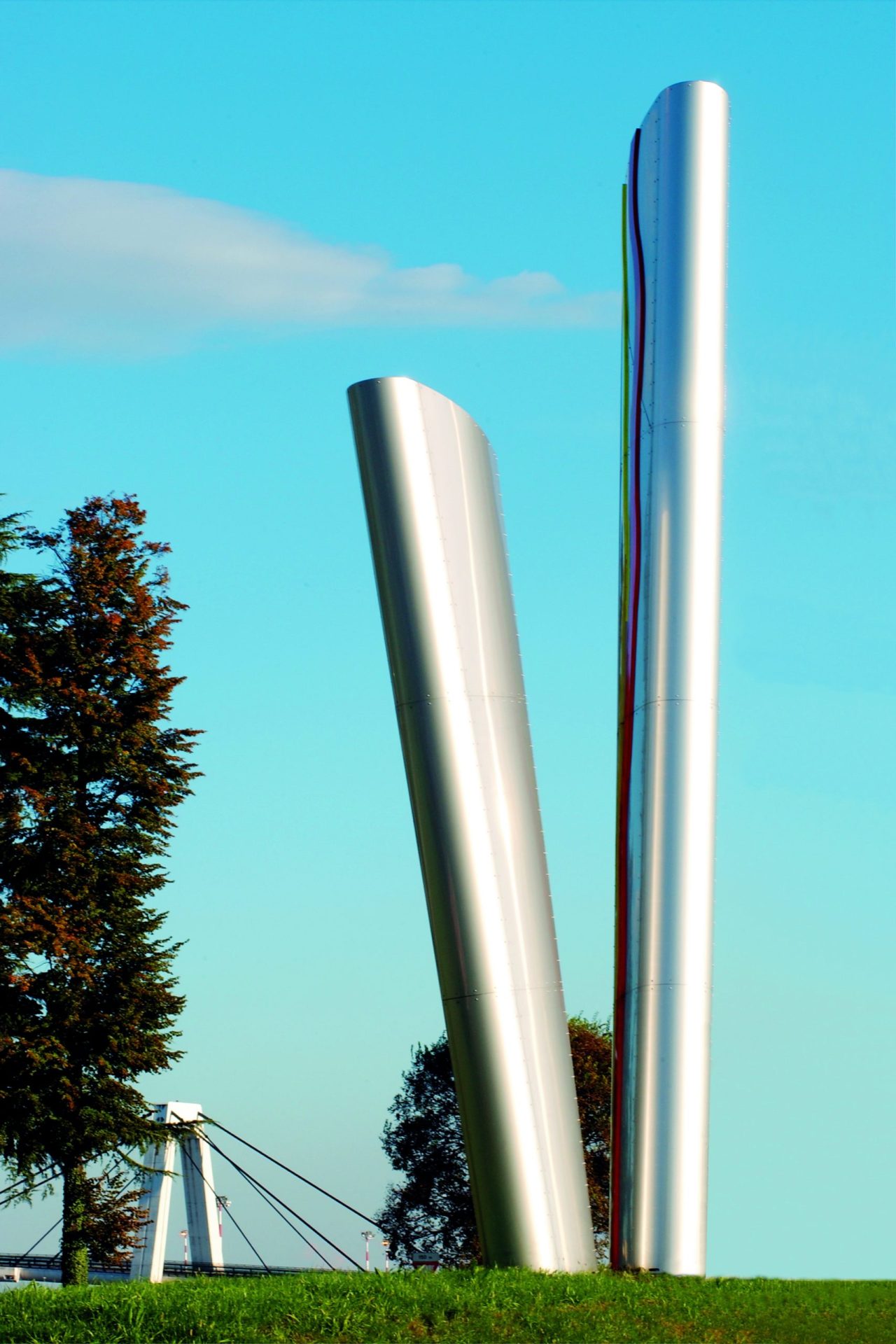 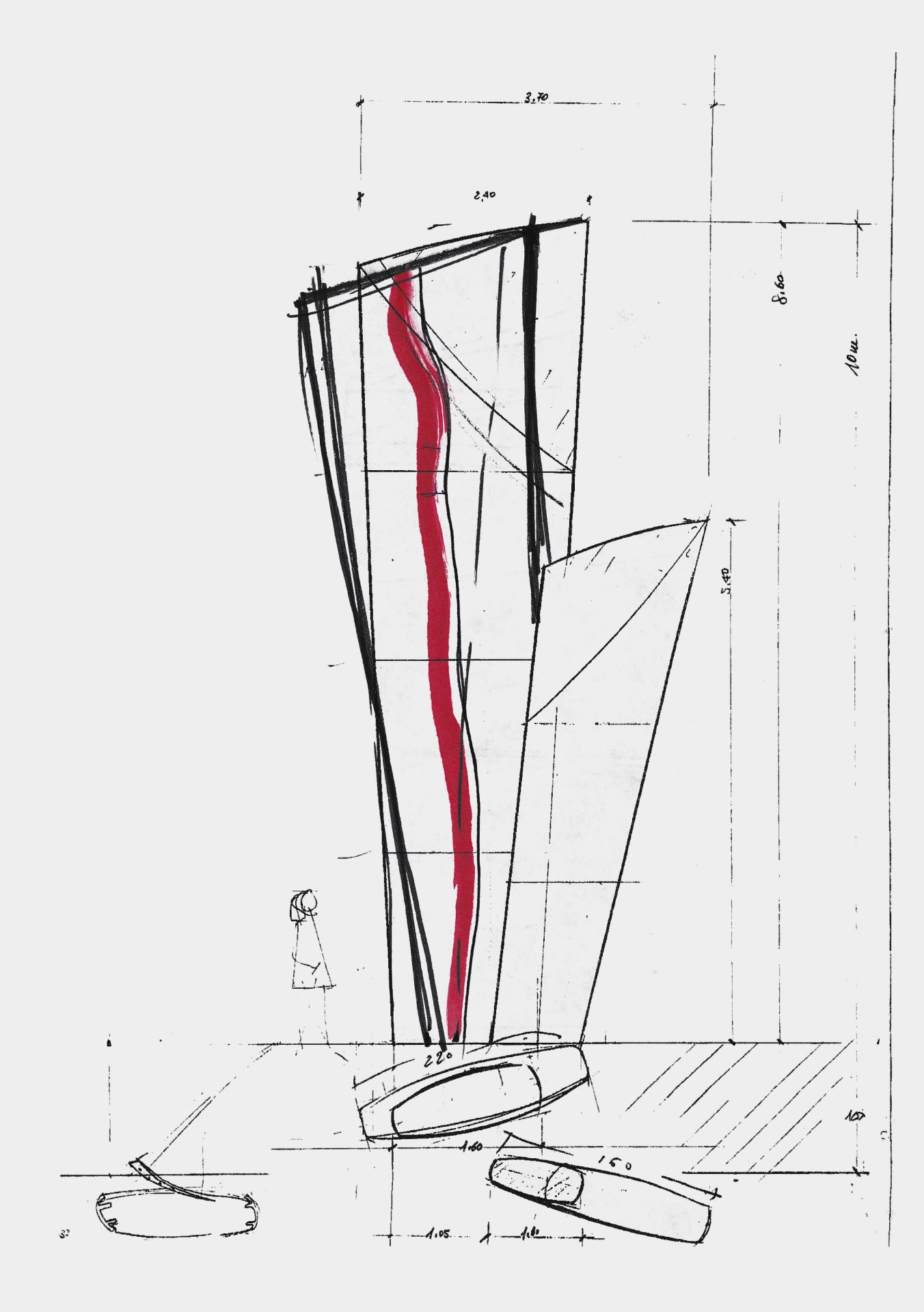 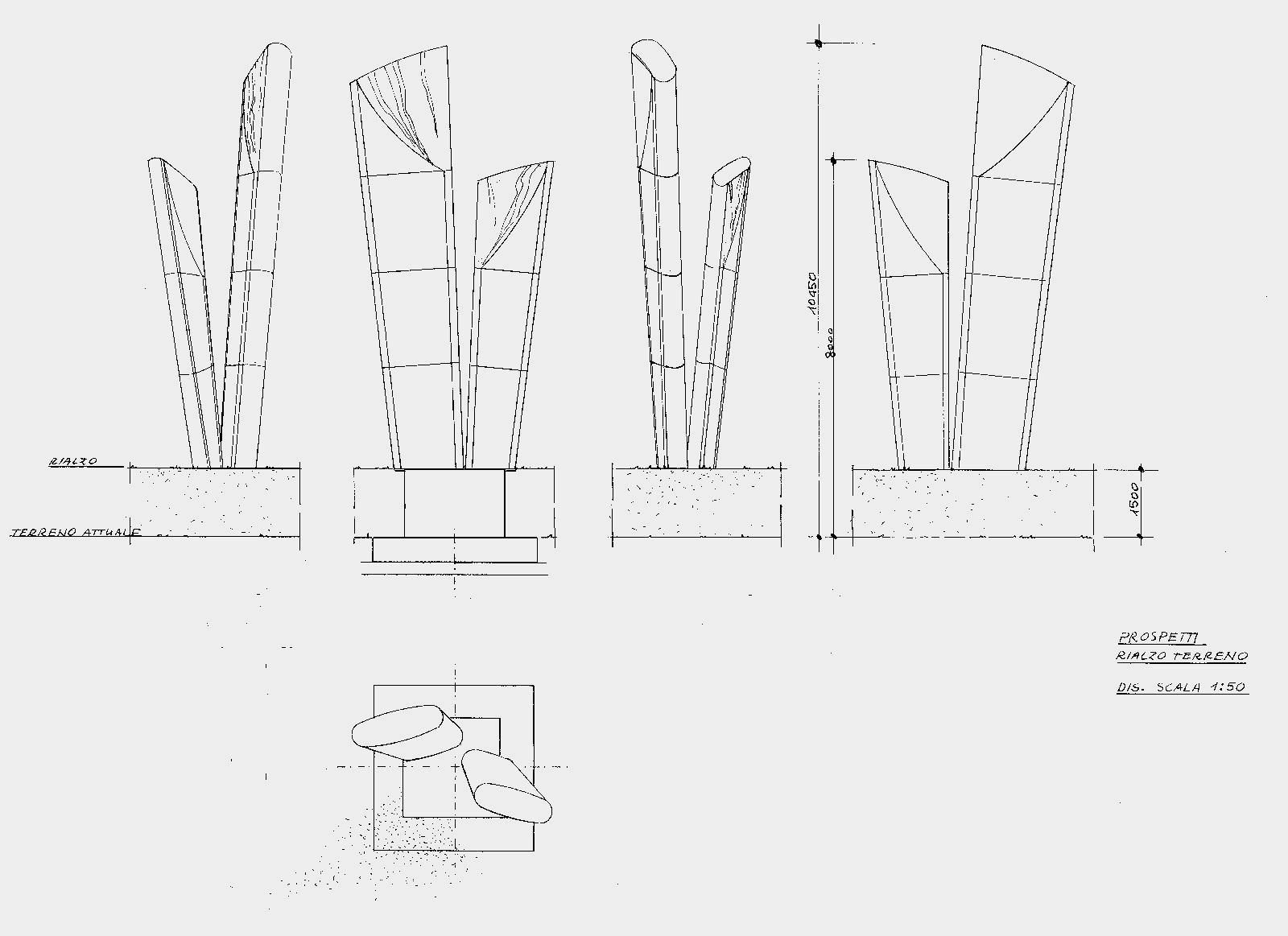 The spatial aspiration of Frattini’s work finds obvious fulfilment in sculpture: investigating matter and colour leads to discovering the relationship between light and materials. This is the case of the Grande V. The Grande V is located right outside Malpensa airport, and its interaction with light is intense and significant. It consists of two large steel wings, and its presence marks the horizon at the foothills of the Alps, lastingly binding Frattini’s artwork to the theme of travelling and crossing over the horizon.

PanzaCollection
PanzaCollection spreads the knowledge of the works and artists collected by Giuseppe and Giovanna Panza during their life together.
PanzaCollection continua nell’intento dei collezionisti a collaborare con musei ed istituzioni.

Fondazione Stelline
Fondazione Stelline is a historic Milanese institution set up in 1986 by the Lombardy Region and the City of Milan. A place for projects, exhibitions, research, publishing and intervention in contemporary and twentieth-century art, the Foundation carries out an action coordinated and supported by the Lombardy Region, in a network with the exhibition programmes of the Milan City Council.

Fondazione Cariplo
Cariplo Foundation owns an artistic heritage consisting of paintings and sculptures dating from the first century B.C. to the second half of the 20th century. A brief presentation of the collection by historical periods is offered: Ancient art; Nineteenth century, Twentieth Century.

Palazzo Collicola
Spoleto, Civic Gallery of Modern Art. In a gallery, the exhibited pieces turn into suspended votive offerings, and all this works, as long as the artist has such an intention, when he believes in it and creates an existential link, if not, it is nothing but a theatrical scene. When a gallery director accepts the works, when the artist himself installs them, they take on another dimension.

MA*GA Museum
The MA*GA Museum is one of the most important contemporary art museums in Italy. The identity of the museum is intertwined with the history of the Gallarate Prize, founded in 1949 and still active today. The Museum, officially established in 1966 with the name of Civica Galleria d’Arte Moderna di Gallarate, was in fact born with the works acquired during the first eight editions of the Prize. A turning point in the museum’s history came in 2009, when the city of Gallarate established the “Galleria d’Arte Moderna e Contemporanea Silvio Zanella” Foundation, whose founding members were the City of Gallarate itself, the Ministry of Culture, and the Lombardy Region and the Province of Varese.

Please fill in the form